i guess you cant stop crying about the chongs crematoriums>

There never was a pandemic

>>2
theres a disease,if its what they say i dont know

...are they storing the bodies of dead patients or DYING patients? 😨

>>6
they tried to send us one too, but we’re in the north so we told them no thanks; we’ve just been throwing them out back with the compost

>>8
i know its acurate that dude is from the fed

My opinion has changed quite a bit. Unless seasonality does affect SARS-cov2 (which there is evidence/research for), it seems to be as bad as modeled.

> Approximately 14 percent of infections are among health workers

One of the thing about this virus is the dosage matters. More exposure makes it worse. Other viruses are like this too, but none to this scale.

The saddest thing is the people who couldn't get O2. It's one thing to die with every measure to save someone being available. It's quite another to die the way people are now.

>>13
No one ever died from a virus. (Complications from a virus.. yes. Especially with previous conditions and old age)>Viruses are not airborne. >They are counting dead bodies as dead from a pandemic that never existed. And they give pics of coffins to the media.

>>14
Fear.. scary words and pictures to get the entire planet to submit. >Brilliant plan.. because it worked! 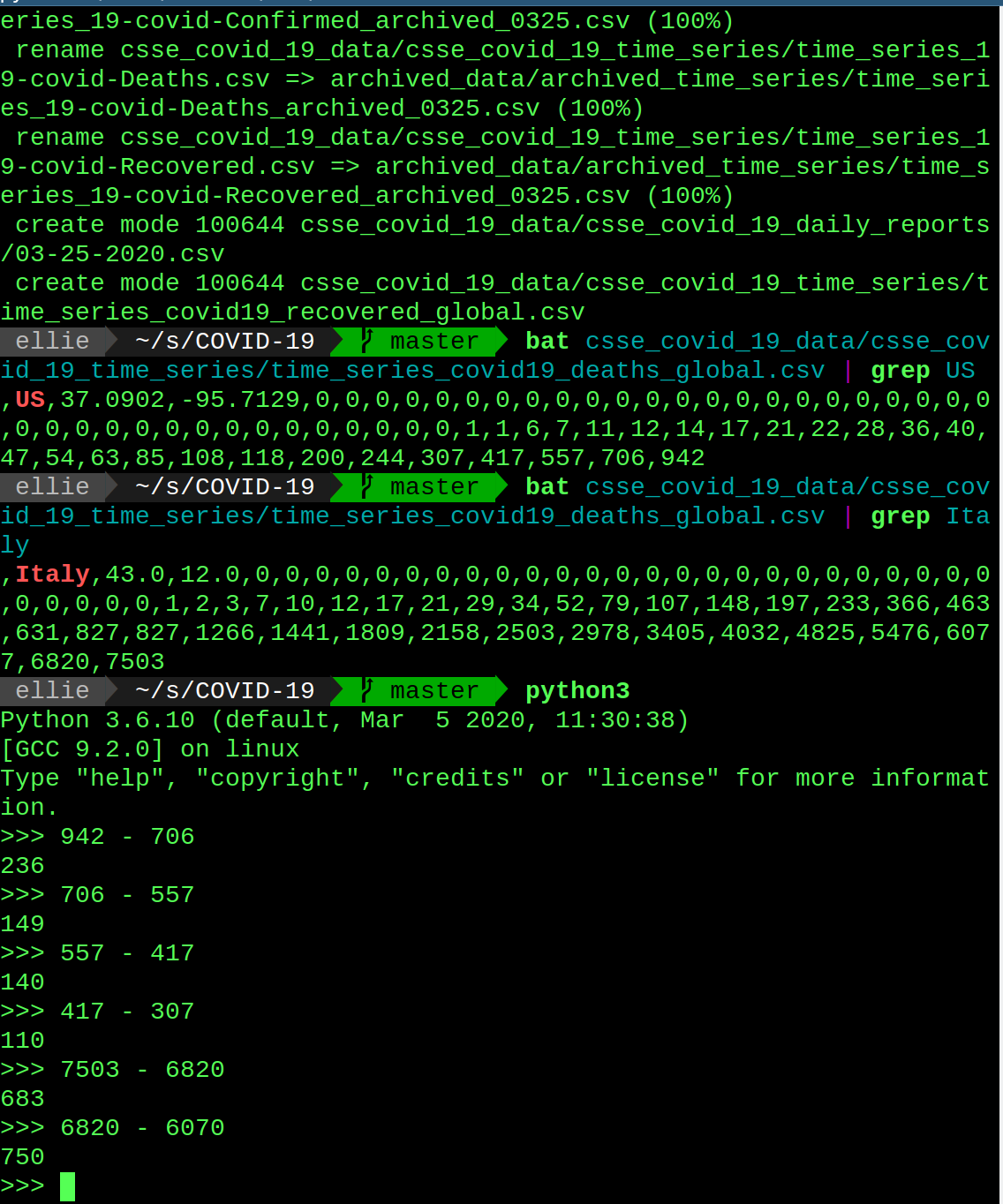 
@Squirrel That's just pedantic. You don't die from HIV, you die because it crashes your immune system (AIDS). So in this case, people don't die from SARS-cov2, but from COVID19. Doesn't really matter. The numbers are real though. Even if you don't believe China is being truthful, I don't see any reason to doubt the Italian numbers and accounts. The time series data adds up:


@Squirrel I understand the need not to panic, I get that I truly do. But this is not a time to hold some unwavering religious opinion. You need to adjust daily. I'm trying not to watch the news but just look at the raw numbers. Will we hit the projections of 350k ~ 1.3m dead in the US? I don't know. I hope not. But we are certainly on that trend right now. That's not scare mongering, that's what we see in the numbers.

>>18
>python arithmetic>what is dc(1) or even shell builtins?


@roka I use to use bc, but now I just start up python as my calculator. In this case I've got another ipython shell where I'm building out the graphs, so that's kinda the reason it's open in this screenshot.

>>20
What? Religions opinion? >Hey believe what you want, live in fear, and obedience and watch tel-e-vision and wait for instructions from daddy goverment, who knows best, and mommy government will take care of you.

if the guns are so violent, why are you not sending them to therapy for anger management issues?

Ouuu.. triggered and obviously incapable of independent thought or research.

>>13
I don't see her being a seasonal thing considering that it's currently the beginning of fall in Brazil and Australia.


@Ricotta I can't find the papers now, but there was some recently released stuff suggesting SARS-cov2 doesn't survive as long in warmer weather. It does match some of the numbers. Italy toll is declining. Australia/NZ was very low but is now growing. We won't really know until June, but let's up there is seasonality because that would at least provide some relief from this.

>>32
Well the fall is the plan. Problem, reaction, solution. > A brilliant yet very effective one. No one takes the blame or responsibility for an invisible and non existent enemy.